To me the idea of Fracking is so crazy that it is hard to believe that it is real and people are actually being allowed to inject toxic chemicals into the earth just to extract some oil and natural gas. Can you say, poisoned water supply? Most of us have seen the videos of tap water that you can ignite. Total insanity.

I am really feeling inspired to do everything I can to oppose this insanity. Just as a way to reassure myself, I will sometimes consult the Tarot. Long ago I abandon the need to do this, once I established a direct connection with Spirit, but occasionally it is helpful to come back to the old Tarot just to see what it has to say.

So here is my reading: http://www.tarotgoddess.com/cgi-bin/tarot/tarot.cgi?TarotDef=..%2F..%2Ftarot%2Fyesno%2Fyesno%2Fvars.cgi&Name=stan&Question=Is+it+safe+to+say+Fracking+is+bad+news+and+should+be+stopped%3F+FTGOTW&Submit1=get+reading

So let's be Strong and persevere until we stop this desecration of our precious mother earth and the poisoning of the water we all depend upon.

If you are looking for a place to start, you might read this blog post, which also was the source of the illustration I used above: http://1bog.org/blog/how-to-become-a-fracking-insurgent-beyond-going-solar/

Posted by huzone at 5:41 AM No comments:

If you are like me, you order supplements every month, at least. I tend to spend about $50-60 a month on vitamins, minerals, herbs, etc. My default source has tended to be Amazon although I have tried many, many others. Puritan's Pride, Vitacost, Nutrition Geeks, etc.

I think Swanson maybe the best. Their quality is consistently high, their prices are at least as good as Amazon's and sometimes way better, and they have lots and lots of house brand products that are really excellent.

As an example, they offer a formula to help you sleep that is very effective and downright cheap. Since I am an insomniac this has been a big help. Of course what often happens is that I get a good two hour nap, but believe me, when you have a hard time sleeping, even that can be a boon.

They are always offering promotions too. This one gives you $5 off your first order, and I get a kickback too. So check 'em out, I think you will like them. And I would love to hear your feedback!

PS. I got an unexpected package the other day which turned out to be a fine demonstration of Swanson's integrity. I had bought some Ceylon cinnamon in capsule form. A little back story: The stuff you buy in supermarkets that is labeled Cinnamon is actually Cassia, a relative that taste a lot like the real thing but is actually a cousin. Since real cinnamon has beneficial qualities, ie, helps to regulate blood sugar, you want the real thing. Well it turns out Swanson had sent me capsules of Cassia that were mislabeled and they sent the real thing to correct their error, with a letter of explanation and an apology for their error.

The point of course is that a company with less integrity would have been glad to sell you the cheaper Cassia as cinnamon. The taste differences are so subtle that unless you have a highly trained palate, you wouldn't notice. So, good for Swanson! http://www.swansonvitamins.com/referral/friend.html?id=d311473d-8ab1-430f-b004-e9c9012b234d 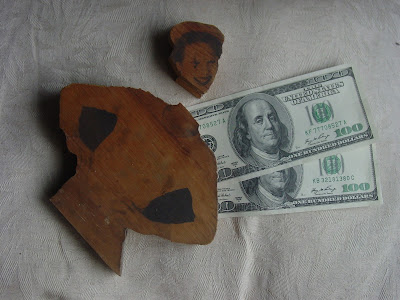 I successfully completed a day long focus group on Monday. One of the fun things about these groups is that you often get paid in cash. So nice to see these two crisp Benjamins at the end of a long day. It really was a full day where we worked hard. We signed confidentiality agreements so I can't tell you too much. But if you are interested in doing this kind of work, you might use the phrase "mock trial" in your Google search.

If you are curious, the wonderful sculpture was done by my late friend, Gary Fey. Those of you that knew him will recognize him in his street performer/clown persona.

In about an hour I have another group scheduled. This one is online, 1/2 hours work and I get a $30 Amazon gift card. If you gotta work for other people, at least it is decent pay, right?

Of course I prefer to be self employed. Since I have retired, I want to develop my new career as an author and public speaker. I also am going to play around with poetry and performance at some open mics to see where that leads. I did discover a great open mic in my 'hood, at Beans and Leaves, a cool coffee house in Long Grove.

When I was born, Jupiter was in Cancer. Jupiter, the planet of abundance, has returned to Cancer and I am getting showered with abundance from all sides. Cancer is the sign of the home. Its rising in my first house which governs your appearance. Unfortunately I have also gotten very fat which you could say is another manifestation of this passage. But I'm working on correcting that!

I put up a gofundme page recently and I already have my first donor so I am excited about that: http://www.gofundme.com/3quo14

One of the principles of prosperity is you have to ASK for what you want. So overcome your pride and do so yourself. The thing is, like with this gofundme project, its win/win/win. I get helped to do work which benefits and is of service to others. Those who contribute get all the warm fuzzies that come from supporting worthy causes and underdogs. So everyone wins!